Can you use the jack properly when changing tires? 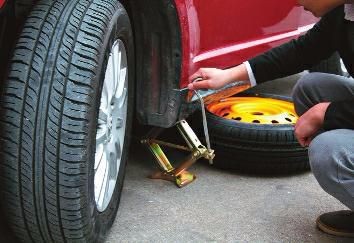 Spare tires are an important part of a car, and a jack is a necessary tool for changing tires. Recently, reporters learned in the interview, many drivers don’t know how to use jack, but do not know if in the wrong place with Jack will bring great damage to the vehicle.

The larger the deadweight, the higher the jack load

The jack can generally be divided into four kinds: scissor jack, screw jack, hydraulic bottle jack and hydraulic floor jack. Rack jacks are the more common type of jack used in a domestic car because of its light weight, small size and easy storage. But because of the limited weight of the support, it is usually equipped with a family car that weighs about 1 tons.” Zhang Shuai, who works at Yulin Qiming Automotive Service Co., said the manufacturer would normally fit a jack suitable for the weight of the car. The jack of a general car weighs less than 1.5 tons, and the utility model can carry about 2.5 tons because of its large deadweight. Therefore, large vehicles can not use small car jack, so as to avoid the maintenance of vehicles when there is a security hazard.

Zhang Shuai also said that at present car enthusiasts in a popular inflatable jack, which is on the air bag is inflated by vehicle exhaust, the maximum weight of such general jack support at around 4 tons, compared with dangerous conditions for rescue or off-road vehicle rescue and turnaround.

If slippage occurs during support, the damage is great

“If the vehicle is not completely fixed before the lifting of the vehicle, then it is likely that the vehicle slipped during support. Once the car slips down from the jack, the damage to the tool or the second, if it causes the injured personnel to repair the vehicle, is too bad.” Zhang Shuai says.

So how to use the jack properly? Reporters interviewed 10 random car owners found that each car trunk is equipped with Jack, and there are rules of use, but only 2 of the 10 car owners have read the instructions, others have not seen. Others say that they do not need to understand these knowledge, an accident will call the repairman to repair. In this regard, the huge Yulin Benz 4S shop customer service manager Shen Teng said, the correct use of Jack needs a parked car, pull the hand brake, manual transmission car hanging into the 1 block or reverse gear, and automatic car need to hang into the P block. After Jack must be used on a hard flat surface, if it is relatively soft ground, such as dirt or sand road, in the use of wood or stone suggested before jack jack pad in the following further operation, to prevent jack into the soft ground.

The wrong support will damage the chassis

Owner Ms. AI told reporters, although the car is equipped with spare tire, but she never personally replace the spare tire, repair only listened to the maintenance master did a brief introduction, simply do not understand the use of the principle of jack. “Men of great strength, able to change operations, for female drivers it is really too difficult.” Ms. AI said frankly.

It is understood that the body there are special support support jack, support by family cars often on the inside of the side skirts, two “fin” like the two sides of the chassis, in front of the back 20 cm, 20 cm in front of the rear wheel. This “fin” is out of the chassis steel plate, can withstand relatively large pressure, if the jack is supported on the steel plate of the chassis, it is likely to cause unnecessary damage to the chassis. In addition, the support on the suspension arm of the lower arm is also incorrect. If the jack slips and the vehicle falls down, the chassis and Jack will be damaged.

Shen Teng also reminded that many domestic car jack rocker split structure, need rotation and supporting the wrench and casing connection, so in the process of lifting jack, force should be uniform, not too fast or too hard.